In 2008, some friends and I were contemplating a trip to Jura by kayak at the end of May. The trip would need settled calm weather as we were considering the possibility of visiting the remote, exposed West coast.

The trip was proposed by my best mate, who’d bought a “beach toy” canoe last year, and has a love of the Scottish Islands. We were joined by another good mate with a bit more canoeing experience (we jointly discovered that Canadian canoes sink in surf, a few years ago, off the W coast of Ireland). I was a bit more aware of tides and weather than them (having a saily-boat), and was happy to go along with the plan in the certain knowledge that there was no way a good weather window would co-incide with a Bank Holiday weekend, and plan ‘B’ would be to mess around in the canoes a bit, and then go to to the pub.

The route around the North of the island would take us through the Gulf of Corryvreckan – home of the infamous whirlpool. As the resident yacht type person, I tried to find information on the local tidal streams and directions.

Answers from various internet forums weren’t forthcoming, so I did what I should have done in the first place and get hold of a copy of NP218 tidal atlas (I already had nautical charts of the area). It turns out that the tides are reasonably complicated, very strong and impressive! (I also found out what an amphidromic point is.)

So it was with some trepidation that I headed North on Friday, with a stable forecast of settled (but windy) weather. Still, I was sure they’d take one look at the Sound of Jura, with it’s inevitable white tops, and Jura just a hazy shadow and revert to plan ‘B’.

After a long drive, a late night in the pub and an ample sufficiency of beer, the first challenge was to condense the two estate cars full of stuff that we deemed necessary into two small boats. We decided to start by packing everything that was essential (tent, trangia, food for 4 days, bottle of malt) and see what space was left. That sort of made the answer obvious. There was no more space.

When we got to Carsaig Bay, the sound was like a mill-pond, so plan ‘B’ vanished forever.

About 3 hours later we arrived at Tarbert on Jura (I’d made sure we’d be setting off with a favourable tide) without encountering so much as a ripple on the water.

Jura is almost cut in two at this point by Loch Tarbert which is open to the West coast. The plan was to carry the boats and gear the mile, or so, across the island from Tarbert on the East coast to Loch Tarbert. The harsh reality of this now stared us in the face – the fully laden boats were too heavy to lift safely (in case they folded under the weight), let alone carry, so everything had to be unpacked. I carried most of the gear across in a big bundle on my back, while my mates dragged the boats across the bracken. We are eternally grateful to a passing walker who carried the remaining heavy pack that we couldn’t manage in a single trip. If you’re reading this: “Thank you!” 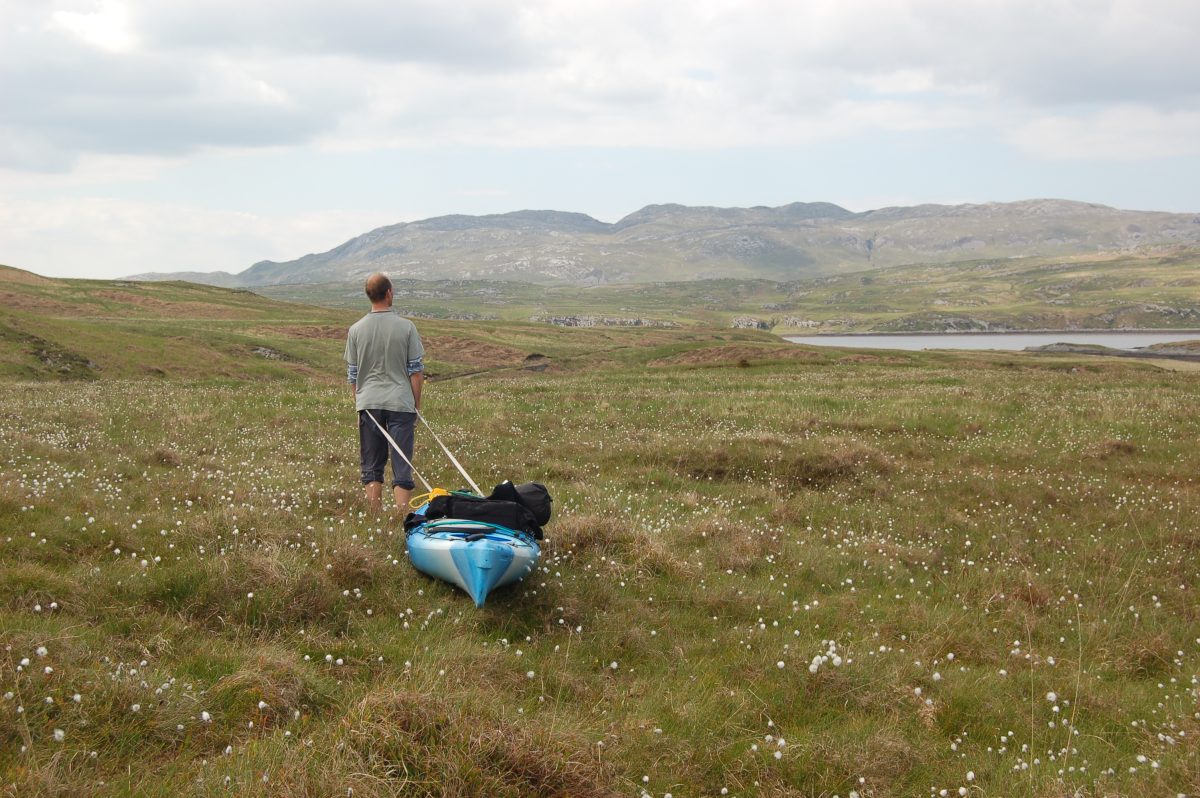 Inner Loch Tarbert is magical – beautiful lochs connected by channels through narrow rocky clefts. We paddled through this maze in late afternoon under a cloudless sky, sheltered from the wind by the surrounding hills. I’m not given to great expressions of emotion, but I’m not eloquent enough to put into words the beauty, tranquility, and quiet splendour of this area and its wildlife. It really is a beautiful, beautiful place. 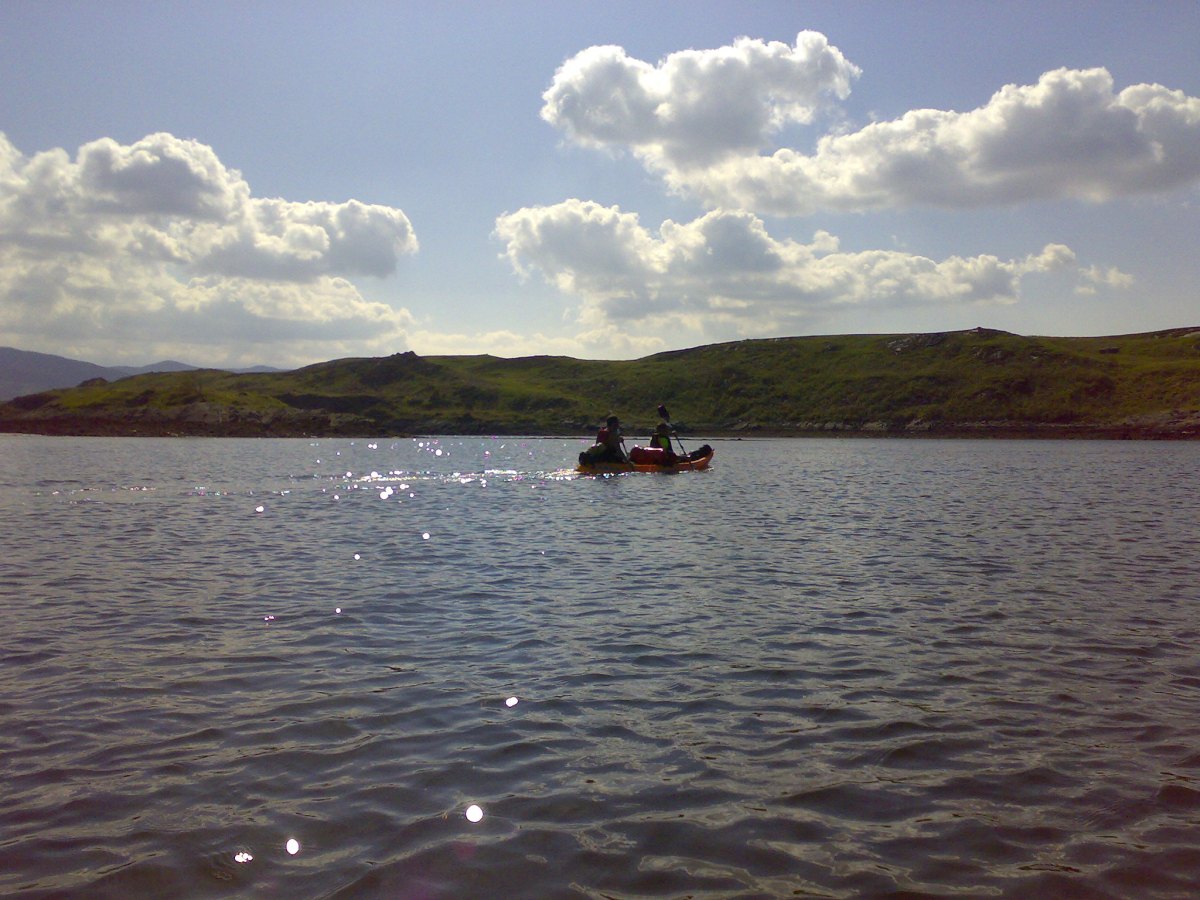 We gradually worked our way out to Loch Tarbert, and set up camp on its South Coast, near Glenbatrick: 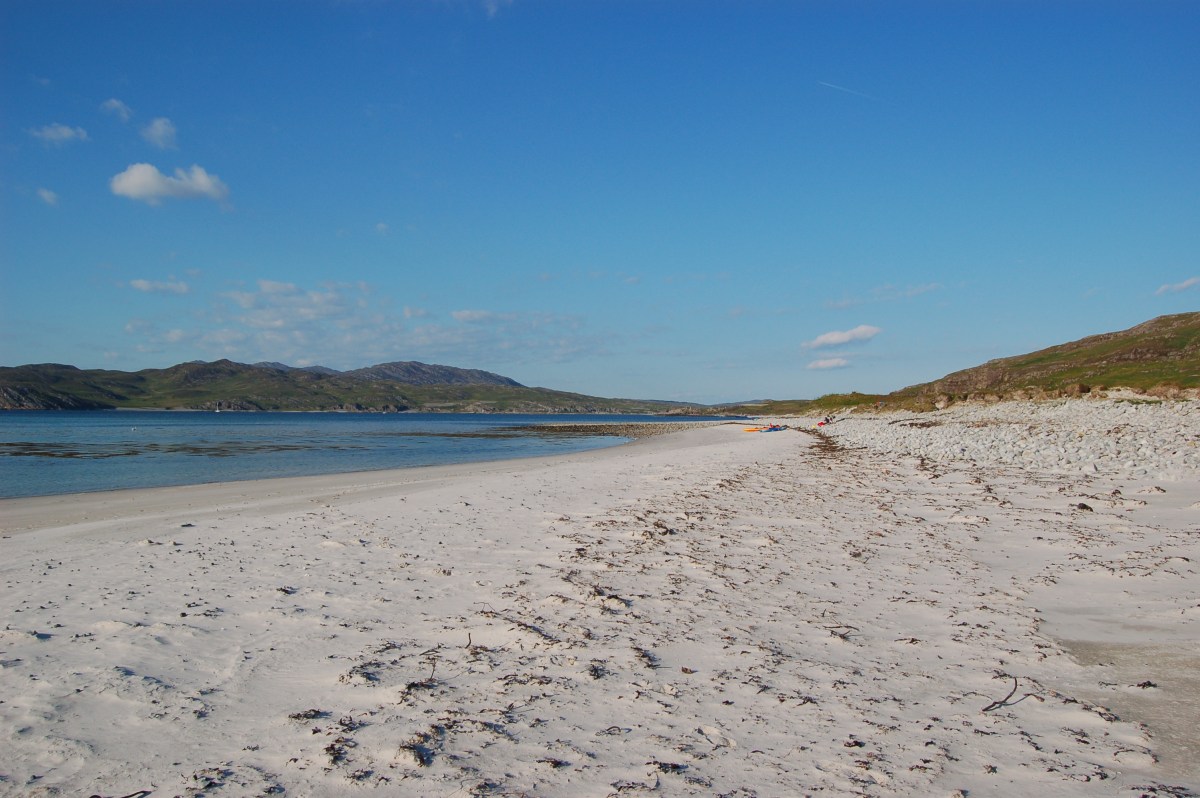 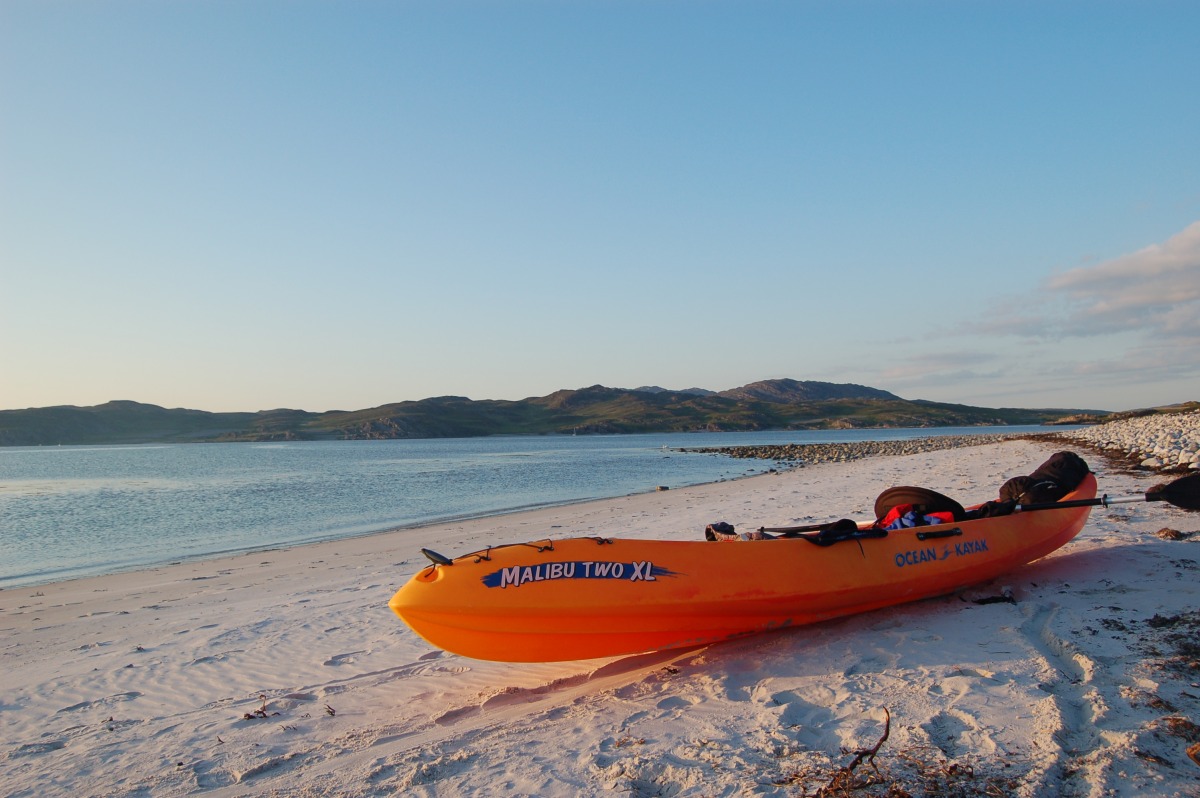 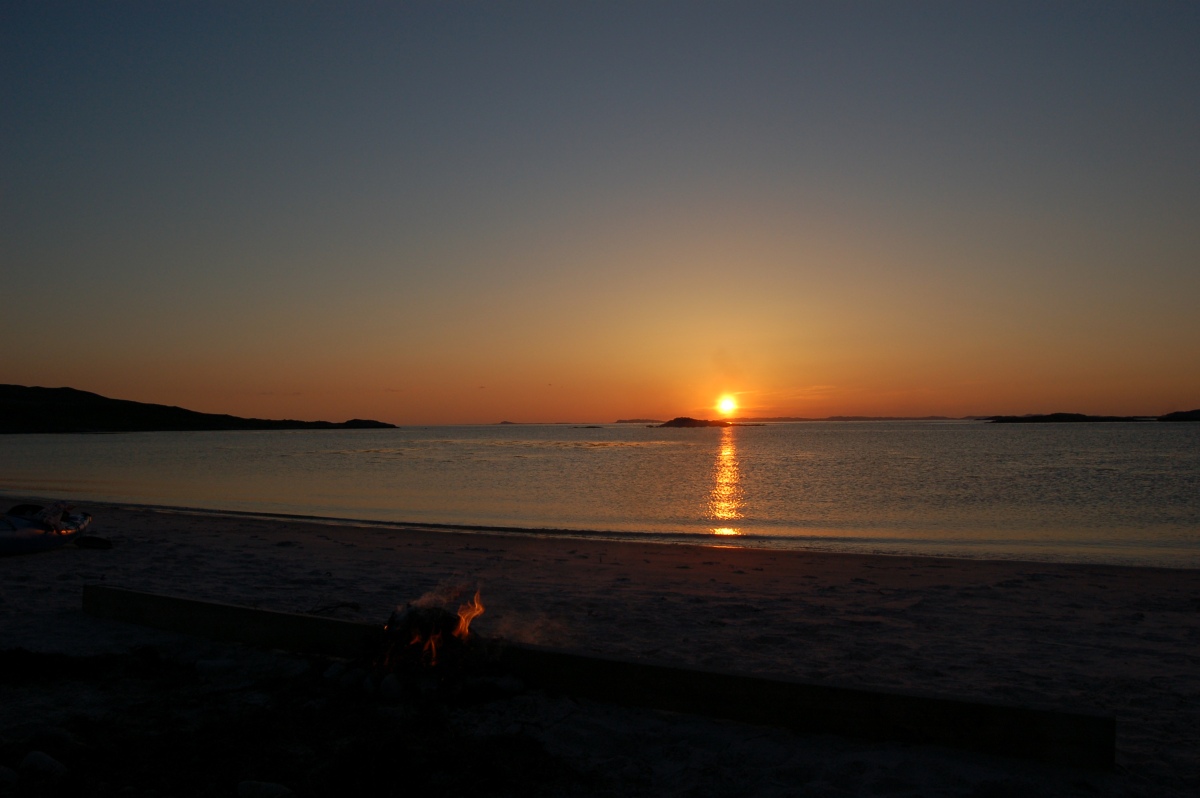 The next day, we wandered up to the Paps of Jura and climb Beinn an Oir, before setting off for a few hours up the West coast, threading our way through rocks and islands. Conditions are, again, nigh on perfect: Smooth water, little wind in the lee of the island, tide with us, and scenery you’d be happy to die in front of. We camped on a ‘raised beach’ just South of Corpach Bay, and experienced another stunning sunset.

We looked out for the ‘green flash’ but didn’t see it. 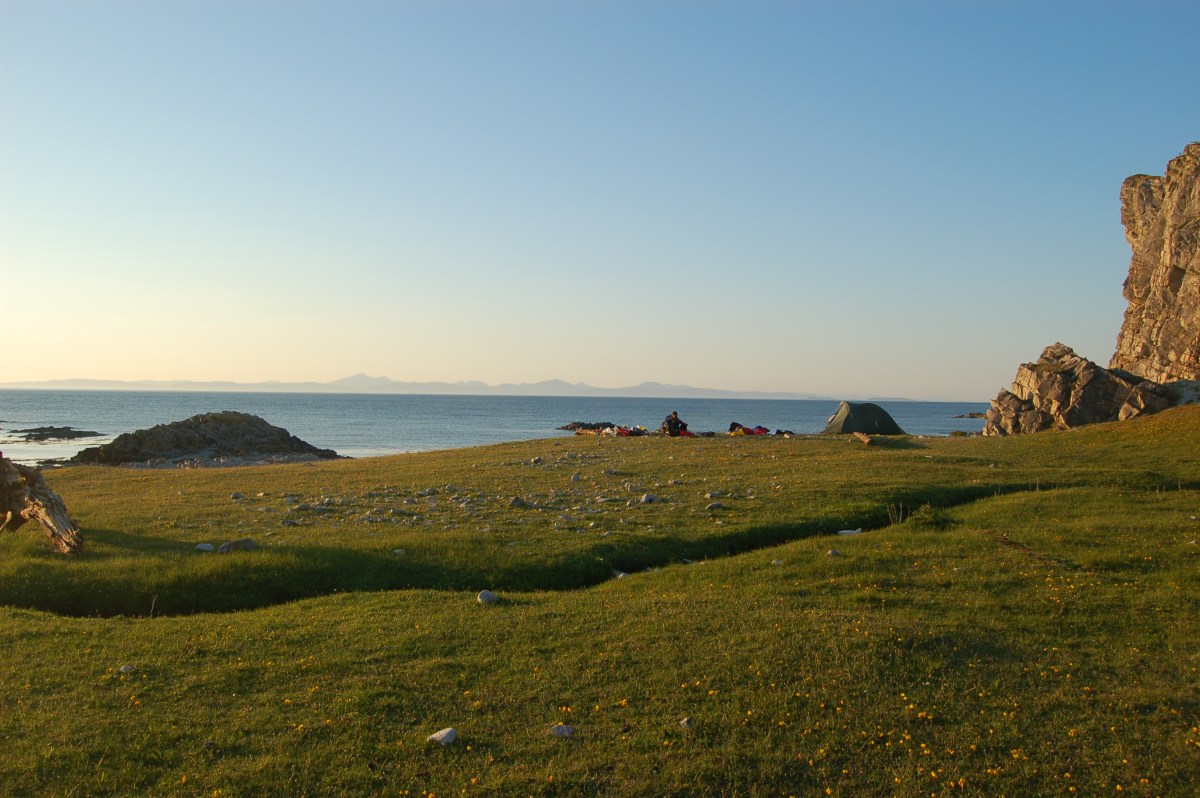 The plan the next day is to work our way up to the top of the W coast and camp in the bay just outside the Gulf of Corryvreckan. The lads don’t want to wait until after lunch for the tide to turn (how hard can it be?), so we set off for a lunch stop in Glengarrisdale Bay, about 6nm up the coast. A very hard 3 hours paddling later, we get there. It’s absolutely idyllic: 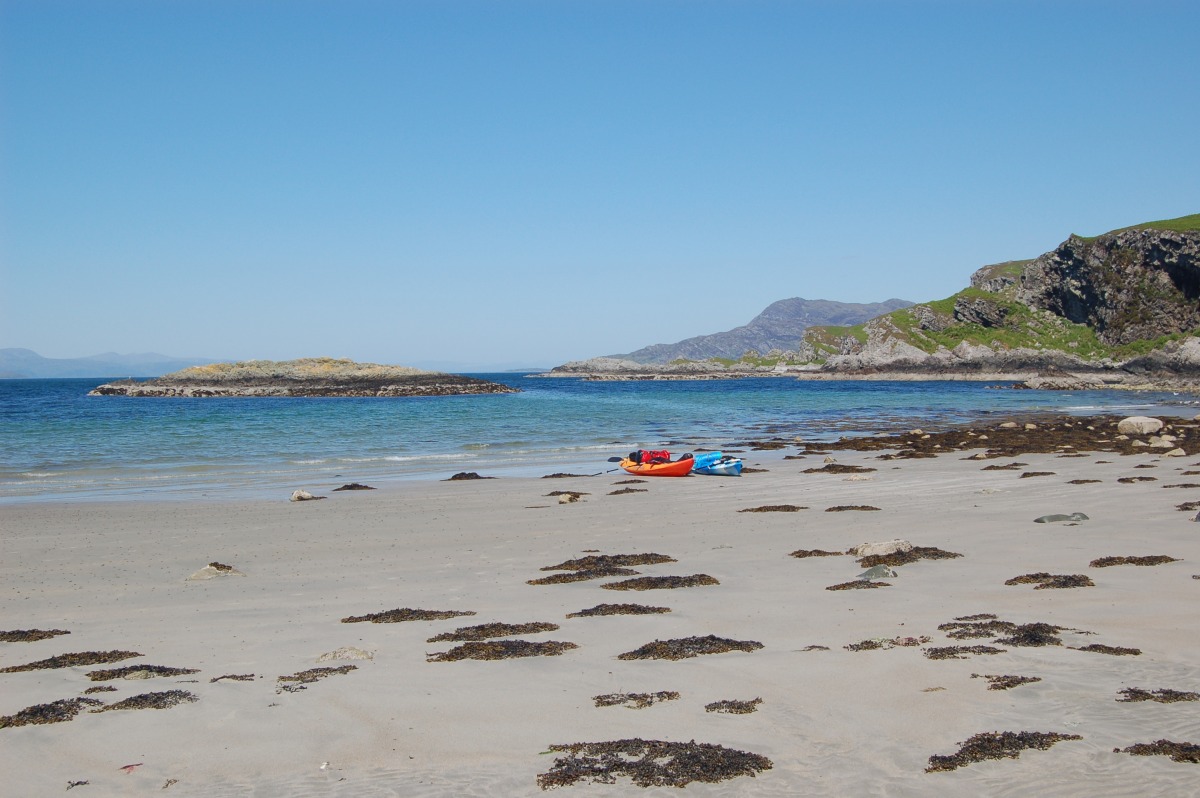 Lunch is cooked, sunshine absorbed, and the tide turned.

What followed was the most perfect two hours I think one could ever experience. The seals that had greeted us with curiosity in Glengarrisdale were following us as we paddled effortlessly up the coast, on a glassy smooth sea, under a cloudless sky. It was like playing “Grandmother’s footsteps” – while we paddled, they followed with their heads out of the water; If we stopped, they stopped. If we moved toward them, they got spooked and dived in unison.

We sat in a flat calm, a few hundred meters from the Gulf of Corryvreckan looking back down the coast: 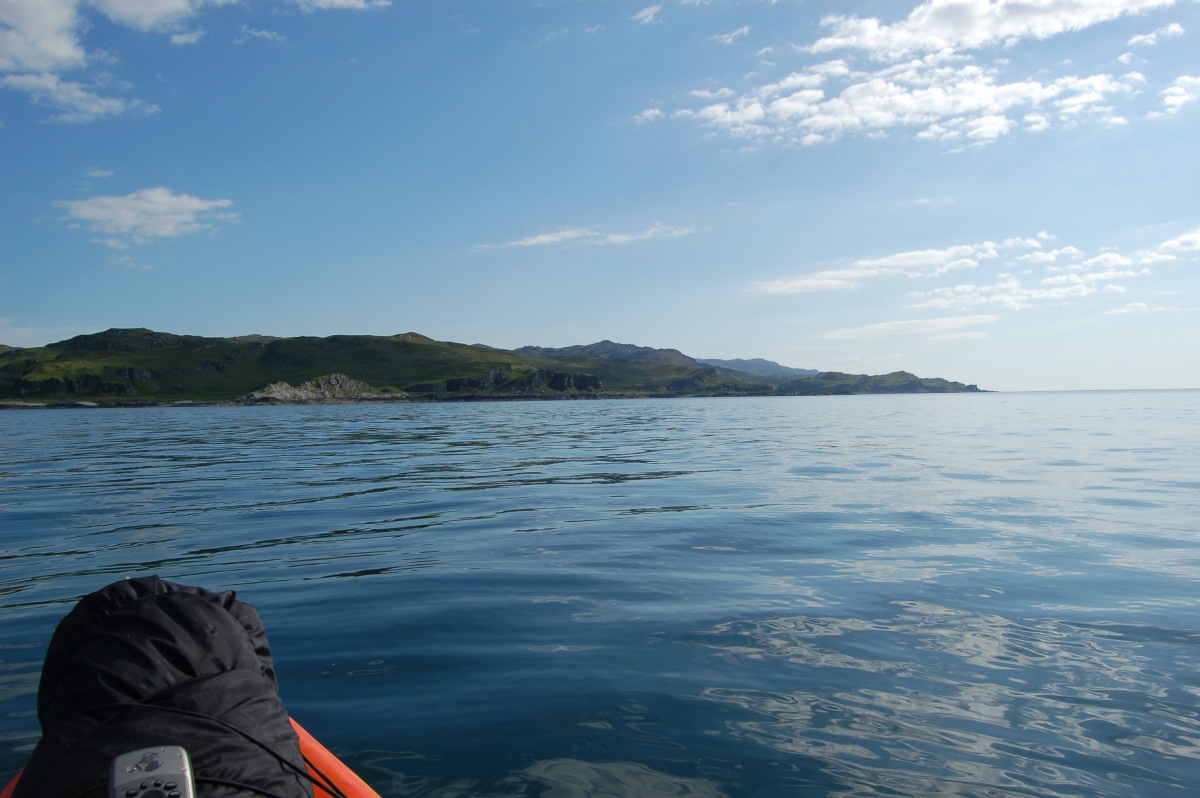 Looking towards the Gulf, with the whirlpool location in sight. The gulf is around to the right, between Jura on the right of the picture and the island of Scarba on the left. 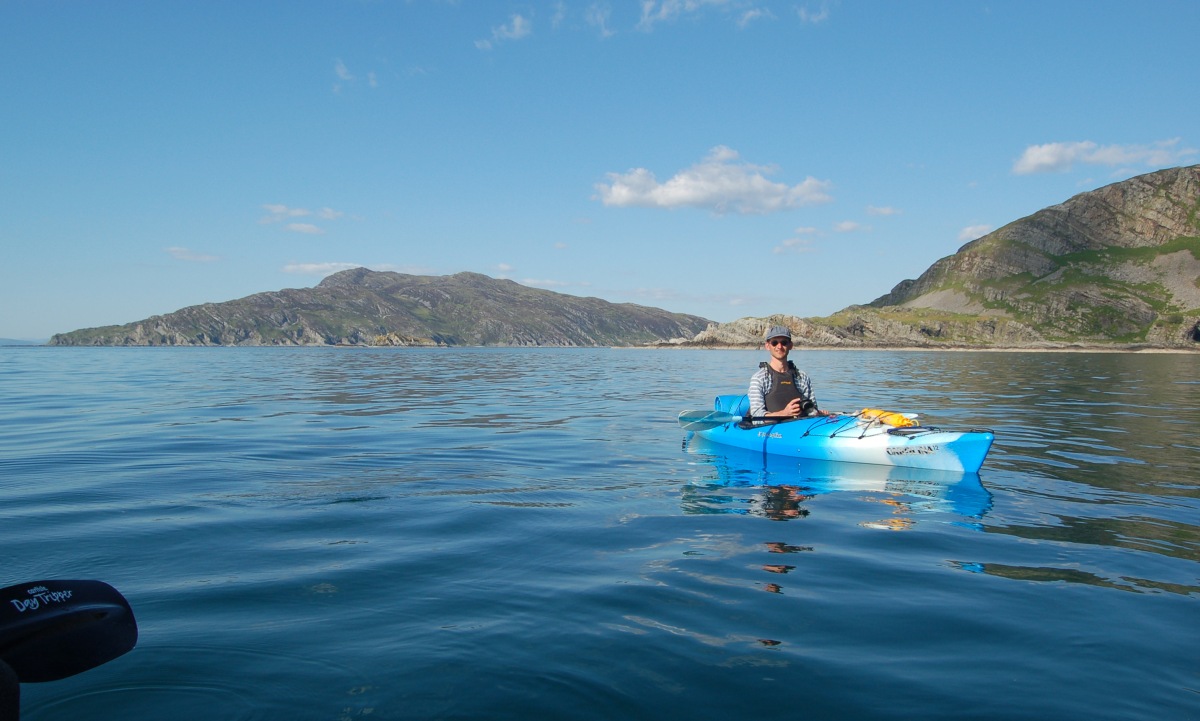 The forecasts we’d had the night before by VHF and mobile phone were predicting E or NE 5-6 for Tuesday, so we decided to make the most of the calm conditions, and go through the Gulf that evening. Ideally, we should have left it an hour, or so, before trying, but the current at the West end, close in to Jura was pretty weak, and it was easy to hop from on small bay to another against the current. The Corryvreckan whirlpool was conspicuous by its absence.

The tidal flow through the Gulf of Corryvreckan was impressive, but what I wasn’t expecting was the flow through the Sound of Jura on the other side. The whole ~3 mile wide sound was flowing like a river in spate (and this is almost on neap tides!). We managed to claw our way around to the E coast of Jura by paddling like maniacs around the headlands, but if the stretches had been 10 or 20m longer, we would never have managed to keep up the pace necessary (probably 5kn+).

Our loose plan was to cross to the N side of Corryvreckan and camp on Scarba, but there was no way we could cross the full flow of the tide without being swept back through, so it became a classic case of “A bridge too far”. There were a number of places we could have landed on the E coast of Jura, but on inspection, they either didn’t have any fresh water, or were midge infested bogs.

We stopped in Port An Tiobairt to check out a potential camp side, and realised we were still being followed by the seals, and they had brought their friends – at least 20 little round heads were watching us! After being surrounded by midges within seconds, we decided to fill our water bottles, and fulfil one of my mate’s ambitions by camping on one of the islands in the sound.

We headed across the still flooding tide to Reisa an t-Sruith which turned out to be even more midge infested and boggy than the sites we had rejected on Jura, with the added bonus of being riddled with what looked like rat burrows (I don’t think they were bird burrows). An illusion shattered. Frankly, I would prefer to sleep in the canoe! The next nearest land is the end of the Aird peninsula, so we head towards Craignish point, and found a perfect little camp site with a gravel beach, and a supply of fire wood. It’s just getting dark as tea is cooked up, and we eat like dogs. The seals are playing in the current through Dorus Mor. There’s enough malt left for a couple of generous tots each. Life is good.

Well, basically, we’ve made it. Just a lazy paddle with the tide to get back to our starting point on Tuesday. The wind picked up, as promised, and it was a little cold and uncomfortable crossing towards Crinan, but as soon as we got in the lee of the mainland, it was fantastic again.

We drifted on the tide into one of the many small bays and I saw some little legs waving in the air from a rock on the shore. As we got closer, we saw it was an otter lying on its back enjoying the sun. It saw us, flipped over, stared at us for a few seconds, then scurried off. We saw another one later on, basking on a low rock.

We hit the wind again as we came into Carsaig Bay. It was an energetic paddle for the last few hundred yards, then it was all over. 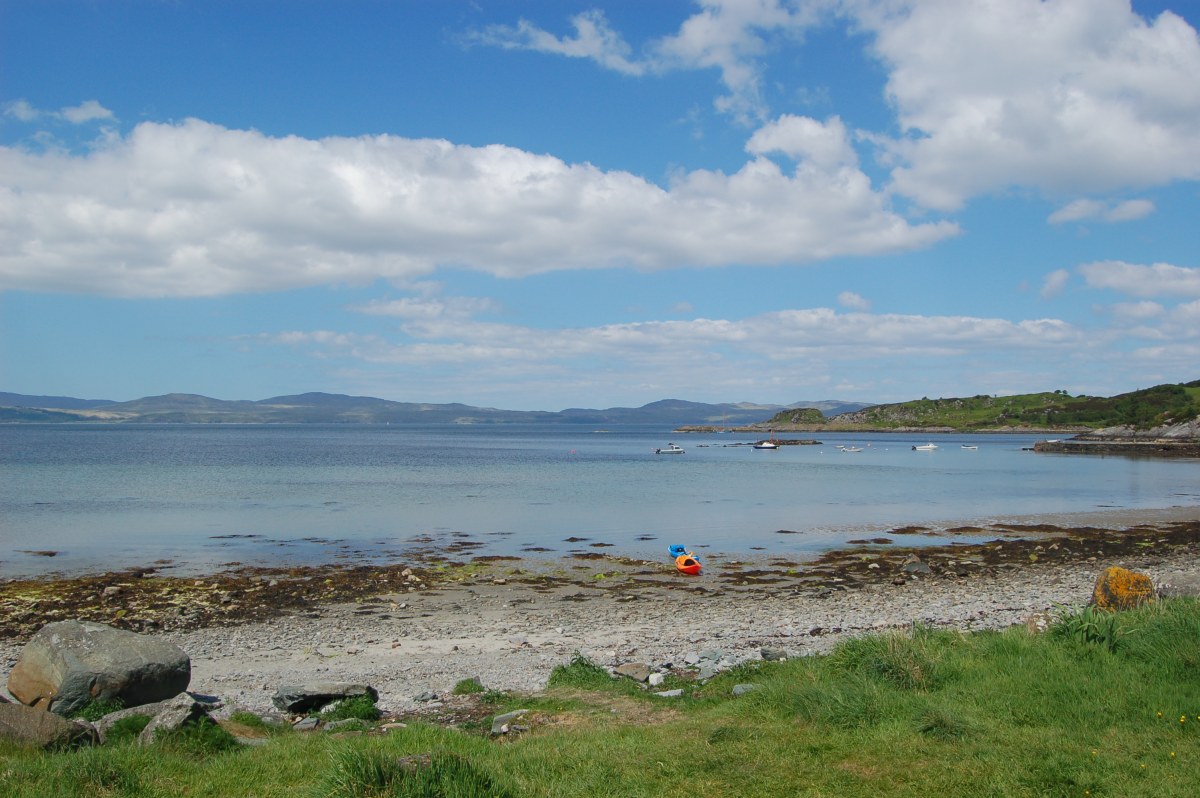 As you may have gathered, it was a stunning trip, and maybe a little audacious: We were so, so lucky to have a weather window like we did; none of us had paddled in the open sea before (except ‘playing’ off beaches); only one of us had paddled more than one or two miles before (the whole trip was over 50 miles of paddling). However, we know each other very well, and we aren’t daft.

Doesn’t half make you feel alive, though.